Construction on Phase 0 has been completed and LPWWA has taken over ownership.  Water is currently being pumped to Lake Durango for use by Lake Durango and when LPWWA Phase 1 is complete, around the first of the year, LPWWA will begin using the water.  This is the first domestic water use out of Lake Nighthorse.

Construction photos can be found here.

On September 14, 2016, LPWWA held the Groundbreaking Ceremony for the commencement of Phase 0 at the Tribute Garden Overlook by Lake Nighthorse. LPWWA, the lead agency, hosted eight entities that have supported the project with their contributions of time and money. The eight entities, including LPWWA,are shown in the shovel line-up below as follows: 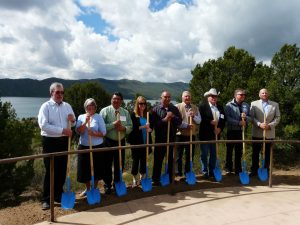 Groundbreaking Photos can be found here.

Unless otherwise noted: LPWWA is back to in-person meetings to be held at the Hesperus Fire Station, 22868 St Hwy 140, Hesperus.  You may still join virtually using the Call-in and Login information in the posted Agenda. Posted by the second Tuesday of the month.